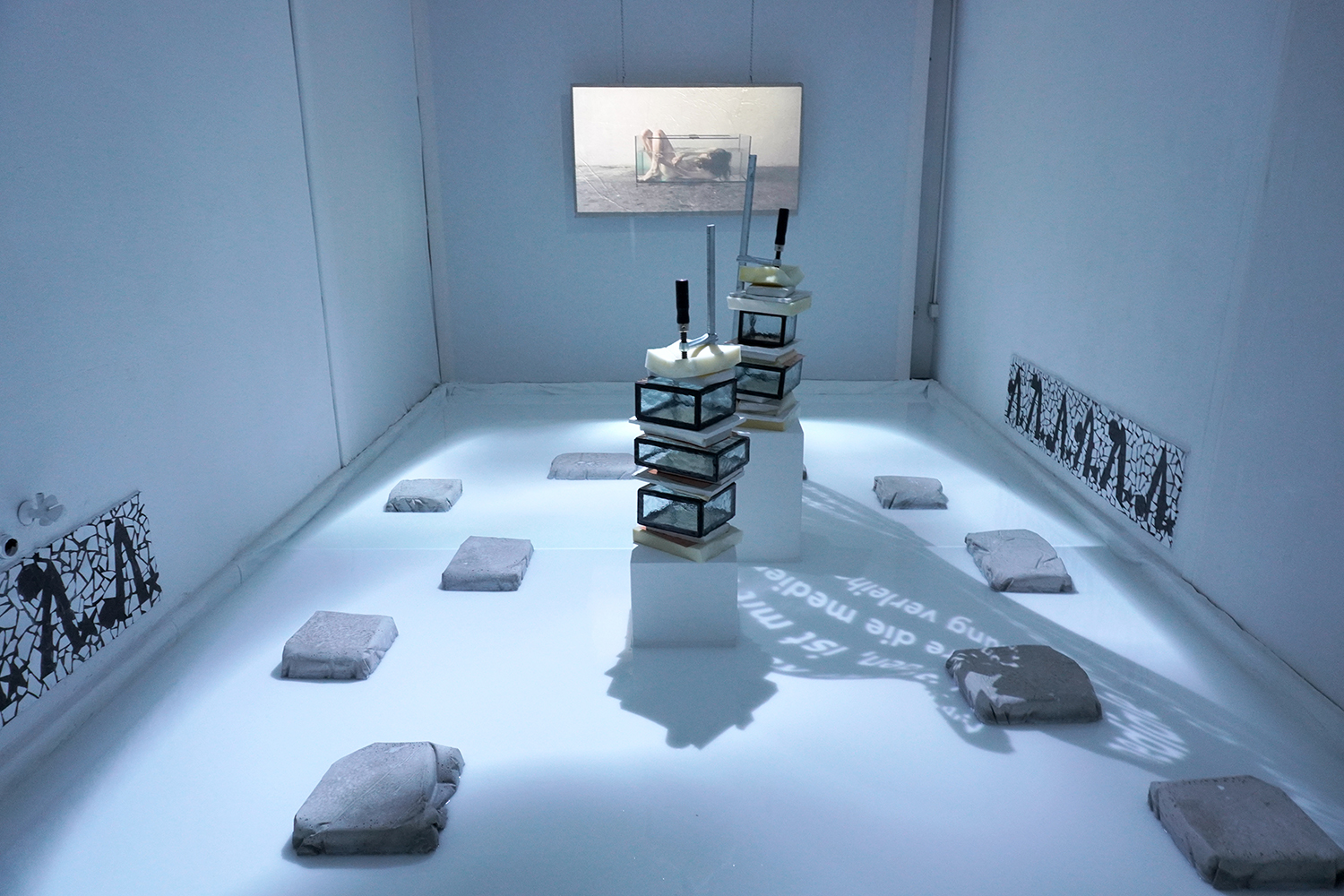 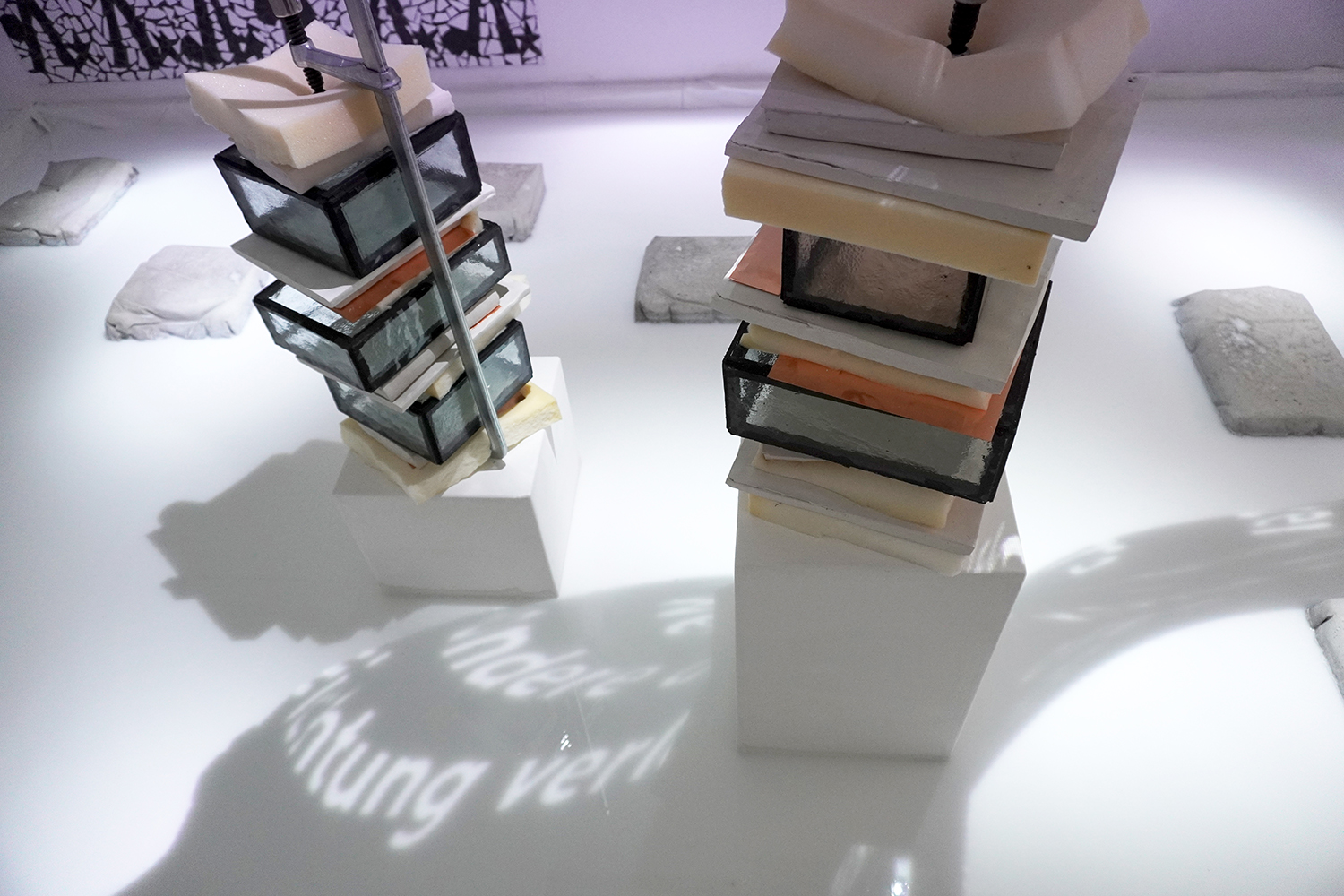 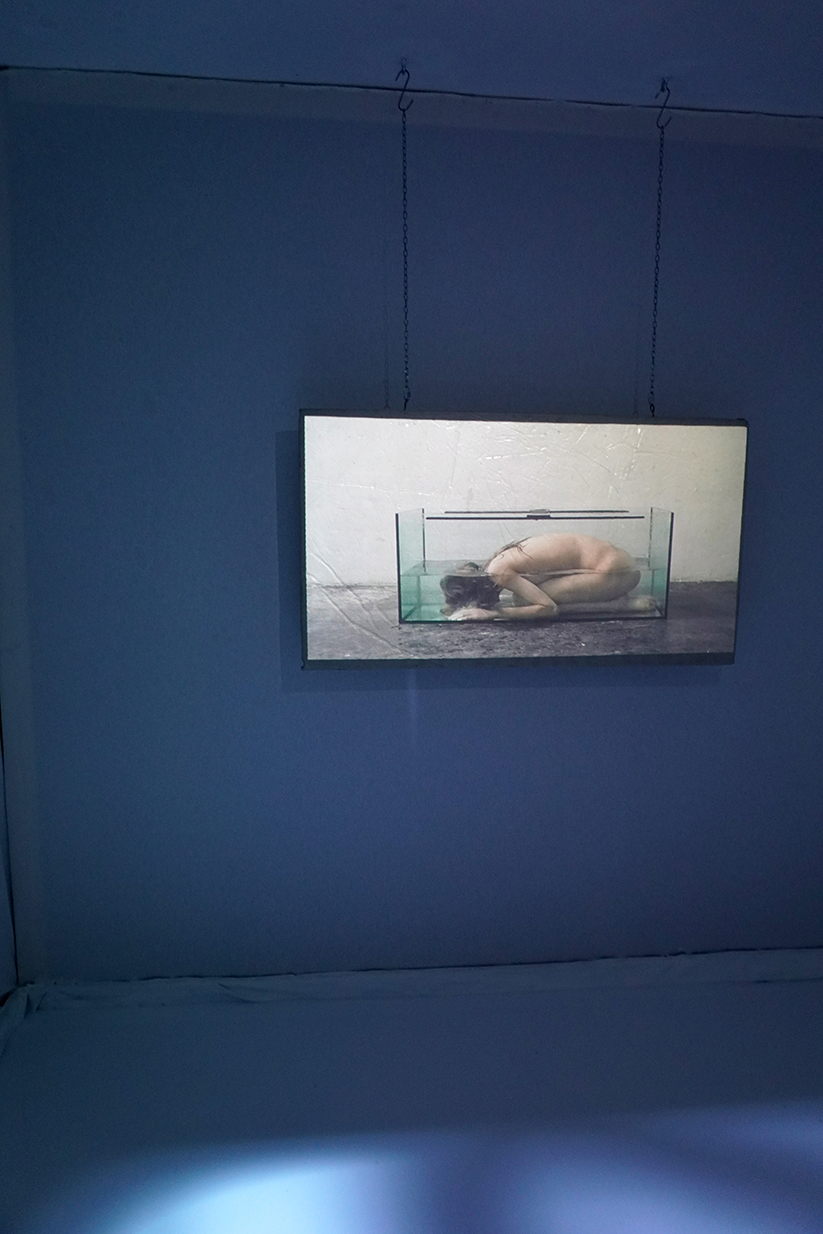 STATEMENT THE PARADISE CARRIES ITS PACKAGE

Within all its weight and lightness, water implies conflicts of a social and personal nature and manifests fragile constructs of society. Adaptation expresses through the power of gestures between language, text, body and space. A delusion of finding oneself in a sound space to escape the illusions of society. Striving and longing for a place, an encounter, a dialogue, a solution, an answer to countless questions. Disorientation and confusion of the senses, represented in their restless repetition.

Eurocentrism is a distortion of the world view, underlying most social theories and ideologies and is based on global relations of domination and suppression. Eurocentric radical thinking and acting is connected with a presumption of superiority that negates or disparages other ways of thinking and philosophies. By ignoring or undervaluing non-European societies as inferior to Western, Eurocentrism also caused the effect that other societies all over the world have the presumption that Western societies feel superior and privileged.

Historiography constructs Europe as an alternative to the rest of the world and Eurocentrism is still a problem of the present and the future. A crucial change of our civilization and a sustainable solution of bias can only be achieved globally.

Martin Sommer’s strong and monumental depiction of burden denotes the oppressive path through blocks of concrete leading through the sap of life that is liquid. Concrete stones in water resemble a predetermined path, that is set in advance by birth and not by own decision. The path through milk, a vital source of food, demonstrates the natural innocence and equality of all human beings. Through Martin Sommer’s sculptures, approaches and emotions should be discovered, evoked by multifaceted materials and shapes. His sculpture “One more chapter” resembles the present in uncountable layers of information about a diffuse understanding of the world.

The video performance “Basic Fish’ by Anna Francesca shows her body in an imaginary relationship between compulsion, adaptation and transformation. An unreal being trapped in complex structures of his own imagination, searching for the exit or longing for an answer. In her inner monologue and existentialist theses about herself imprisoned in an imaginary bubble that resembles a mockery of our society, she faces a hopeless struggle.

Hanna Besenhard´s interactive sound and video installation “Je mehr desto weniger” illustrates the power and intensity of an obsession. Fluid, time-based, blurred words emerge, where beginnings and thoughts combine. Continuously resulting in fresh arrangement, equal to life where changes and renewal arise. Depending on the people moving in the room, the sound and volume changes. Her Eurocentric media is expanded by artificial intelligence and, as a hypocritical source of information, are formed into a media collage and appear on the milky surface like a meaningless newspaper article that one quickly skims over. Text and generative graphics are formed like puzzles out of the many layers of the media landscape.

With his mosaic illustrations ‘Imagine Sisyphus a happy man’ Egor Urakov refers to the place of birth, which can be a privilege in some countries or resembles a punishment in others. The attempt to escape, the setting in motion of the stones and the eternal failure as a metaphor to Sisyphus. He illustrates the clumsy nature of people, always starting over and over again, he sats an example, a repetitive style, never giving up and tirelessly going on. In the endless search for paradise – with all its burden.